Ok it has happened, ok we didn’t expected. But keep calm and carry on.
For the day trader, today will be a tough day, for a long term investor it should be very mildly uncomfortable until you take stock of where we are actually at.
Yes, this Brexit is a decision that the markets in recent days did not expect and yes this will go down in history. But don’t make mistakes now that will make it your history too.
We have been really pleased in recent years about the lack of “jumpiness” of our clients. It shows the message really is clear from us.

Never time the markets. It is time in, not timing.

I have a lot of respect for Carl Richards, check out behaviorgap.com (spelt the American way). What I like is how he simplifies things. I think this his illustrations in his weekly New York Times column really show us in a simple way how we should think about investing.

Right now where do you think we are on the cycle… 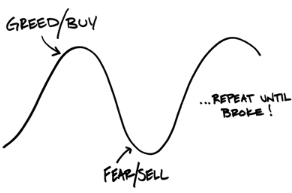 It doesn’t actually matter where we are in the cycle, the message is clear. The only thing that this picture lacks is that it is at the wrong slant. The reality is markets do go up and down but they up and down with upward momentum. The picture makes more sense like this 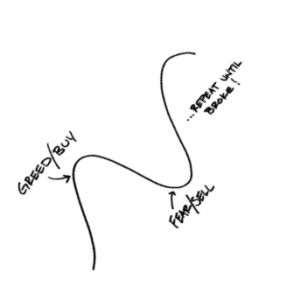 The fact of the matter is it doesn’t matter whether we are at the top of the bottom of the cycle timing markets it a fools game for the long term investor. Carl also sums this up quite well. 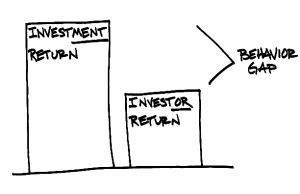 The numbers behind this picture are startling. Between 1990 and 2009 the average US investment fund returned 8.8%. The average investor in those funds only got 3.2%! The reason, because of investor behaviour. That is they got out at the wrong times.
You can do well get in a time like this, but I still wouldn’t wait for markets to drop to get in.
Reacting to any negative event will damage your long term returns. If you missed just 25 of the best days on the market between 1986 and 2014 you would have roughly halved your annual return and would have been better off in government bonds. In other words if you took you money out for just 25 individual days over a 22 year period and those days turned out to be the best ones you return would have went from just under 10% per annum to just over 5% per annum. 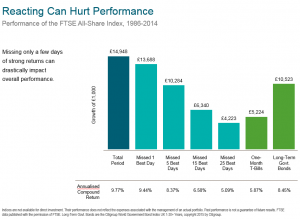 Best Days! Eoin what are you talking about these are going to be the worst days!

This is not the case, history has shown us that markets in general respond well to market crisis. In fact if we take six major market crisis in recent times, 3 years later the markets were on average up by 21%. Let’s hope this is a market crisis! 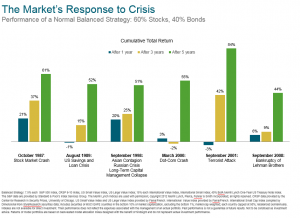 Yes Brexit has happened and yes markets will be difficult to watch for the next few days and weeks, but guess what there is great opportunity in there and the long term investors should not be panicked. The long term investor expect days, months and years where they will get negative returns just as we expect good years. Markets move with up and down with an upward trend, don’t get off the boat in a storm. If you have cash, its time to consider, (in a measured way which we can help with) getting into the boat. If not you might be 21% behind in 3 years’ time.
Remember there are more good years than bad. 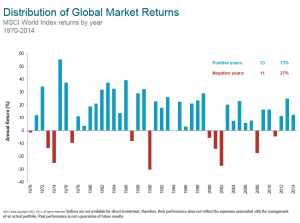