In recent times more and more people are realising that Asia and particularly China is becoming the largest economy in the world. Is it likely to become the world’s largest economy and when?

Hans Rosling’s recent Ted Talk tells us it is likely to happen in July 2048, on his 100th birthday approximately! http://www.ted.com/talks/hans_rosling_asia_s_rise_how_and_when.html

Hans makes a good point in the talk about how up to now growth in china has been externally driven and over the next 20 or 30 years we will see the lower classes becoming middle class and more of the growth will become domestic growth. The Chinese demographics are perfect for such growth and with the largest population in the world (approximately 1.3 billion people) that is a large shift.

International companies realise this too. Take the auto industry as an example. When you buy a car in China if it is not made in China there are heavy taxes to be paid by the buyer. This has made a significant impact on the sales of luxury car brands.

Lexus who still make their cars in Japan to ensure absolute quality of the end product have been slow to open a manufacturing plant in China. This means if you want to buy a Lexus in China you have to pay these heavy duties.  All the other luxury brands have set up manufacturing plants in China in order to be able to sell at the discounted rate to what will be the world’s largest market.

As Hans mentions in his talk lower end product will be dramatically affected too. As people start to make a little more money they shift up a gear in terms of the little things. For example toothpaste, moving from own brand or indeed no brand to the likes of Colgate. If this happened in Ireland Colgate would be happy about it but when you look at the scale involved in China Colgate are ecstatic.

In recent years the shift from West to East has been dramatic. In 1990 2% of the worlds GDP was made up of emerging markets by 2010 this figure had become 40% and by 2014 Neptune investments estimate that 60% of the worlds GDP will come from emerging markets. The graph below shows the shift year by year by market capitalisation over the last decade.

If the world is moving east already and is expecting to shift further that way in the future how can the individual take advantage of this? There are lots of funds available in Ireland capturing the growth of the region. Some of them will take investments on a regular basis and some will take lump sums of as little as €5000. Since July 2005 investing in emerging market funds (if you picked the right one) you could have doubled your money, if you had of invested in the S&P 500 (a basket of US shares) you would have made a return of about 5% in total. The graph below gives an indication of some of the funds available to Irish Investors. It displays how €10,000 would have performed. 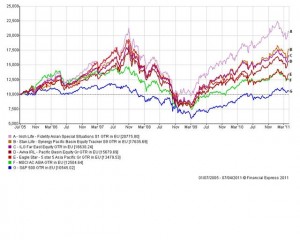 When constructing a portfolio emerging markets certainly need to be a part of it, but note the sentence says part not all of it. We have to take into account that although there has been phenomenal growth it has, in Chinas case, spanned two decades. Everyone argues that China is different, everything is right about its demographics and it is not so much growing at a rapid rate but actually catching up with the rest of us.

These are all valid arguments. However I recall sitting in the Four Seasons Hotel in Dublin in 2005 listening to the ESRI debate with Pam Woodall of the Economist magazine about the Irish Property market. The ESRI argued that in the case of the Irish Property market it’s different here, most of the population are young, and we are only catching up after the lost decade of the 80’s. Pam Woodall said she had seen and heard it all before and we were no different.

I think Asia and China in particular are a great story and I do think you need to have some part of it but as I said it should only be part of your portfolio and it should be managed closely. The real time to take advantage of this was ten years ago when most of the investment world thought you were mad to go near it. I am not saying it is too late but I am saying that the growth prospects are not as obvious as they were ten years ago.

So where might you ask does the investment world think you would be mad to go near now? I think a good long term investment would be Africa, the world outsources to China and China outsources to Africa. There are big caveats involved in investing in such markets so you need to go in holding hands with a solid investment house. There should be good stories being told from Africa over the next ten years or more you should consider being a part of it.

Any cookies that may not be particularly necessary for the website to function and is used specifically to collect user personal data via analytics, ads, other embedded contents are termed as non-necessary cookies. It is mandatory to procure user consent prior to running these cookies on your website.