There is about €30trillion in “funds” worldwide. About €6trillion of this is invested in passive funds with the remainder in active funds. What is the difference? Because there is more in active than passive, does it mean that active is better?
Active management means you pay a fund manager, usually a bloke, to look at a stock market or sector and pick out the winners and dump the losers in advance. You expect the fund manager to add value to your portfolio by beating the market. A good active manager will take advantage of anomalies in share prices or move quickly to take advantage of rumours that may yet have impact on a share price.
Investing passively means you buy the benchmark. You often hear on the radio or in a news bulletin the terms, the ISEQ index of Irish shares, the Nasdaq or the S&P 500. These are all indices. They track a particular market. For example the S&P 500 tracks the top 500 companies (based on their market cap) in the US.
You can buy the benchmark or the index for a lot cheaper than you can buy an active fund. Again using the S&P 500 you can buy it for about 0.07% per annum whereas the cheapest active manager will charge you 0.5%+.
That’s ok if the active manager is adding value after fees. A recent study carried out by S&P Dow Jones (an index provider) found that 99% of US actively managed funds sold in Europe failed to beat the benchmark since 2006. International equity funds sold in Europe failed 98% of the time.
It is argued by the active world that active managers add real value when things go wrong, they don’t fall as much as the market and they protect when things go haywire, yet only 1.3% UK funds stayed in top quartile for the 3 years 2008-2011
It is now harder than ever before for a manager to beat the market. This is because of market information, liquidity and efficiency. Turn over in funds is now twice as high it was in the 90’s, are these active managers’ justifying their existence?
You could argue there are some star managers out there. Neil Woodford, Anthony Bolton, Warren Buffet all spring to mind. These are great managers but we do have the benefit of hindsight when it comes to them. I believe it is possible for a fund manager to beat the market but is it probable?
But what about avoiding the market all together and just investing in business or property. Donald Trump is considered extremely wealthy. He talks up his own wealth quite a bit. Forbes recently did some research and estimate Don is worth about €4.5 Billion. Not bad, at all.
But what if Don had simply invested the money he was gifted by his father in 1974 in the S&P 500 instead of building a property empire. Trump says he got a €1million kick start, Forbes believe it is closer to €40 million. Using the €40 million figure and investing it passively with allowable leverage in the S&P500 since 1974 he would be worth €13 billion today. That’s a $9billion uplift, for sitting back and not building an empire.
The active world is going through some tough times right now. With regulators and politicians now starting to stand up and take notice they are only going to come under more scrutiny to justify fees and lack of performance.
So why is there more in active than passive, there may not be for long, Assets held in passive investments have grown by 230% since 2007, whilst money flows out of active.
There is a place for active, but it needs to be justified. At Prosperous we have recently revisited and completely redesigned our in-house investment portfolios, we believe in passive with a twist. Over time all our clients will move to this model but if you would like to hear more please do get in touch. The twist is the exciting bit! 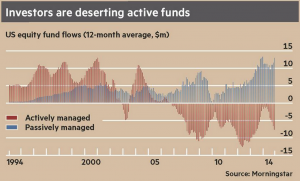